A Defence of Poetry

Anarchism: What It Really Stands For

How To Become A Lightning Calculator

On the Art of Fiction 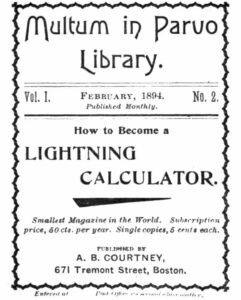 How To Become A Lightning Calculator

Accuracy should be first considered, then rapidity. Quick adders, by the way, are the most accurate.

Write the numbers in vertical lines, avoiding irregularity. This is important. Keep your thought on results not numbers themselves. Do not reckon 7 and 4 are 11 and 8 are 19, but say 7, 11, 19 and so on.When the same number is repeated several times, multiply instead of adding.

When adding horizontally begin at the left.

In adding long columns, prove the work, by adding each column separately in the opposite direction, before adding the next column. Many accountants put down both figures as in the illustration. The sum of the first column is 12; carrying one, the sum of the second is 20; carrying two, the sum of the third column is 15; carrying one, the sum of the fourth column is 21, and the total, 21502, is found by calling off the last two figures and the right-hand figures, following the wave line in the illustration. This method is better than the old one of penciling down the number to carry. If one desires to go back and add a certain column a second time, the number to carry is at hand and the former total is known.

How to Add Two Columns at Once.

Much of the information here contained is compiled from W. D. Rowland’s valuable little volume, entitled “How to become expert with figures.” You can get this handy book by sending 25 cents in stamps to American Nation Co., Boston.

To Multiply Any Number by 11.

Write the first right-hand figure, add the first and second, the second and third, and so on; then write the left-hand figure. Carry when necessary.

To multiply by 5, add a cipher and divide by 2.

To multiply by 25, add two ciphers and divide by 4.

To multiply by 125, add three ciphers and divide by 8.

Another Easy Way to Multiply.

To multiply two figures by two figures, proceed as follows: Multiply units by units for the first figure.

By a little practice any one may become as familiar with this rule and as ready in its application as with the ordinary method.

To find the value of any number of articles at 75 cents each, deduct one-quarter of the number from itself and call the remainder dollars.

To Subtract Any Number Consisting of Two Figures from 100.

A number is divisible by 2 when the last digit is even.

This simple rule is in use in many houses where several discounts are allowed from list prices. Suppose the list price of a piano to be $500, and you allow an agent 25, 20 and 10 off.

On the Art of Fiction

Anarchism: What It Really Stands For